"French views on climate, the environment, and development"

Our 6th edition of our International Development Barometer, "French views on climate, the environment, and development" is now available to download here. 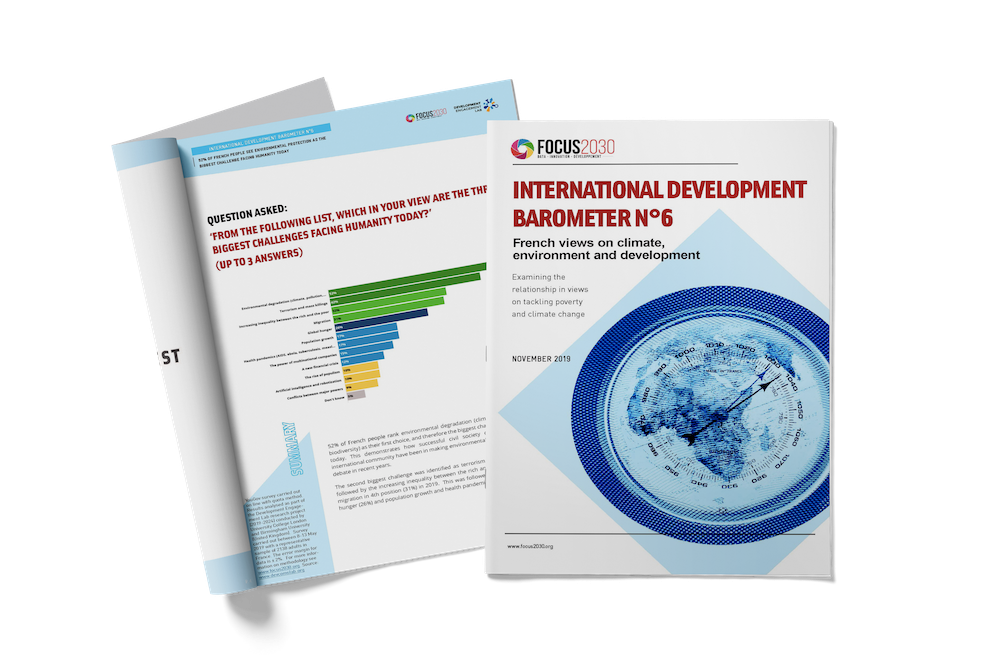 During the Green Fund replenishment conference, held in Paris on 25 October 2019, several states (including France) made commitments totalling 9.8 billion dollars, sending a strong signal on the need for rich countries to support developing countries with managing the increasing impacts of climate change.

Following the Green Fund replenishment conference and the UNFCCC COP26 climate conference in Madrid in winter 2019, and in advance of the strategic COP26 conference postponed in 2021 due to the COVID-19 pandemic, this edition of the International Development Barometer aims to to better understand and explain French views on environmental protection and development, and the interaction underlying those opinions.

In today’s world, the question of ecology has long been overlooked in politics, the media, and on an everyday basis in society. This has resulted in seemingly runaway damage to every aspect of our planet and environment. In under two centuries, human beings have turned the earth into a hostile, unpredictable environment, where the only certainty is that the worse is yet to come.

The Development Engagement Lab research project, supported by Focus 2030, offers a tool for measuring this kind of transformation in public opinion. What do French people understand about the urgency of the situation? Whom do they hold responsible for taking urgent action on climate change? And given growing environmental concerns, how aware are they of the interdependency of countries, citizens and economies all over the world, in contrast to the different priorities of rich v. developing countries? Questions which examine the tendency for people to look inwards, as well as their willingness to accept the fact of a globalised world.

As it happens, the data we discover in this edition of the International Barometer point clearly to a growing awareness and priority given by French people to environmental issues.

From the results, we see that most French people today can relate to those who care about the environment. This figures seem to suggest that French people are ready (and willing) to make more and better efforts to save the planet. However, the results do not show us how far French people would really be willing to go - nor how much they would be willing for it to cost - to adapt their lifestyles to a more environmentally sustainable existence.

Respondents’ answers to this question reveal not only what French people would be willing to do for the environment, but also what they would not be willing to do - a measure of their reluctance to change their habits, consumption or way of living. In this way, the variety and sometimes contradiction of the answers (which are, after all, only opinions rather than concrete commitments) inspire both optimism for the future, as well as some cause for concern.

Concern about poverty in developing countries is also correlated to concern about environmental protection. Both dimensions overlap, as if worrying about the planet, and worrying about global poverty, jointly reinforced a common awareness and appreciation of a collective existence on a shared planet. There is also concern and firm conviction that economic development in poor countries must not be based upon by the same model which stimulated growth in rich countries previously, but which we now know to have caused so much damage to the planet.

Political preference impacts the way in which people understand the consequences of climate change. The further left-wing the respondent, the higher the perception that poor countries will be the biggest victims of climate change. Centre-voters have similar views. Right-wing voters, on the other hand, believe that climate change will affect all countries in the same way.

The modern-day debate about the economy v. the environment compares two different priorities, and two different timescales. The first is about fostering economic growth, in order to feed the world’s population (both ‘here’ in France, and everywhere else) and to provide people with housing and healthcare. The second is about protecting our planet - not just for today, but for tomorrow, and the long-term.

French people see the most effective way of reducing the impact of climate change as being through international policy (their top choice). But in reality, faced with the complexity of climate change and its impact, the combinations of first/second/third choice answers to this question suggest that French people see a value in combining multiple responses, actors and approaches for maximum effectiveness.

Paradoxically, French people give (almost) equal weight to international action (like the UN COP21 conference) as they do to individual action (such as changing one’s lifestyle) as the best solutions to the climate change challenge. In contrast, a European-driven solution receives little backing (19%), through still ahead of the very few people (9%) who see action taken at national level as the best solution.

A few months before the Equality Generation Forum, Focus 2030 wanted to question the perceptions of French people about gender equality in France and around the world.