Due to the COVID-19 pandemic, for the first time in the history of humanity, 4 billion people have simultaneously endured the unprecedented experience of lockdown. For several weeks, as if the world had suddenly stopped turning, the entire planet suspended its economic activities: planes were grounded and stations were empty, while the days were regularly punctuated with each country’s reports of skyrocketing numbers of infections, hospitalizations and deaths.

A bit like a dress rehearsal before the global catastrophes predicted as a result of climate change, in facing a common enemy, humanity was reminded that we share a single destiny, and face the same risk on the same planet. By way of illustration, 67% of French people reported being more aware that an event on the other side of the world can have consequences on their daily lives.

Contrary to previous public health crises, the unprecedented character of this pandemic can undoubtedly be found in the incredible network of countries and people, made particularly possible by the use of the internet and by extension, the digital universe. The immediate transmission of images and information, the capacity to virtually feel somewhere else all whilst staying at home, the stream of communications between citizens from here and there has reinforced the feeling that, faced with this inevitability which knows no borders, international cooperation is necessary.

On the other hand, the temptation to fall back into nationalism or regionalism, echoing the confined conditions of the lockdown and in itself an exercise in introspection on an individual scale, is a very real option. With the virus still coming from elsewhere, for a certain number of French people, it is other people that we must be protected from.

This ambivalence towards introspection on one hand and widespread international collaboration on the other is notable in the opinions that we gathered for the Development Engagement Lab project between June 3-7, 2020. When given the choice between two deliberately divergent options (which, in reality, could be complementary), those asked declared on average to be slightly more inclined to think that the Covid-19 pandemic highlighted the need to take back border control (44%) than to consider that the pandemic underlines the need to step up international cooperation (38%).

Furthermore, 56% of French people firmly believe that when it comes to Covid-19, France must support developing countries by giving them access to tests, treatment, and vaccinations. Only 13% do not agree with this measure of solidarity, which, in a global epidemic, puts the same value on the health (and therefore survival) of individuals here and there, and the fact that it is therefore the responsibility of the richest countries, like France, to support populations living in countries with the weakest health systems.

Even so, these opinions vary according to each individual’s political orientation while remaining mainly dominant amongst all French people. So, on average, 68% of those who voted for Benoît Hamon, Jean Luc Mélenchon, and Emmanuel Macron in the first presidential election round in 2017 agree with this idea, while among those who voted for Marine Le Pen, this figure falls to 39%.

Nevertheless, only 26% of the latter oppose North-South solidarity with regard to the Covid-19 pandemic, as if global health challenges ultimately constitute a more federative aspect in terms of international solidarity.

Young people below the age of 25 are particularly aware of the necessity of France lending its support (65%) to ensure treatments, tests, and vaccinations are available to developing countries. This trend in favor of support can also be observed among French people with a high level of education. Taking a closer look, those who oppose this solidarity remain a small minority (13% on average) regardless of the level of education. We can therefore note that health issues, in the context of a pandemic, whose effects rest upon a common understanding shared on a global scale, represent a rather consensual territory when thinking international solidarity in France. 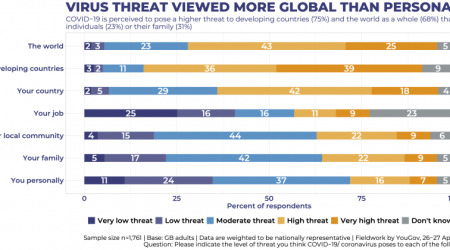